The main question of

is the film company. In fact, it should be a film and television company.

More specifically, it is not only Horgos, but also Dongyang, Shanghai and Wuxi are the gathering places of the film and television industry.

later on, let’s get to know Huoerguosi first. 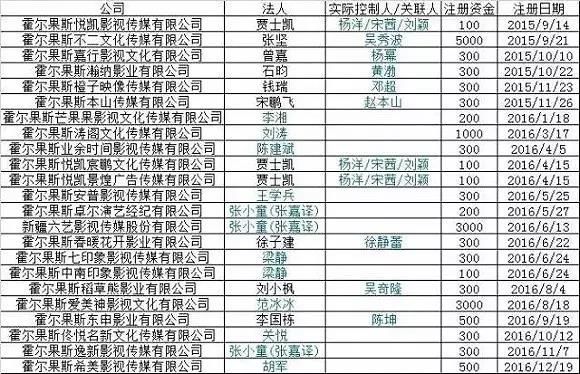 Horgos, situated in Yili Kazakh Autonomous Prefecture of Xinjiang Uygur Autonomous Region, lies on the edge of the cocktail of the whole map of China, opposite the neighboring Kazakhstan.

Although the city had already been built, as an important post station of the Silk Road, Holgos, known as “the south of the Yangtze River beyond the plug-in”, still retained the grassland scenery where cattle and sheep could be seen everywhere. 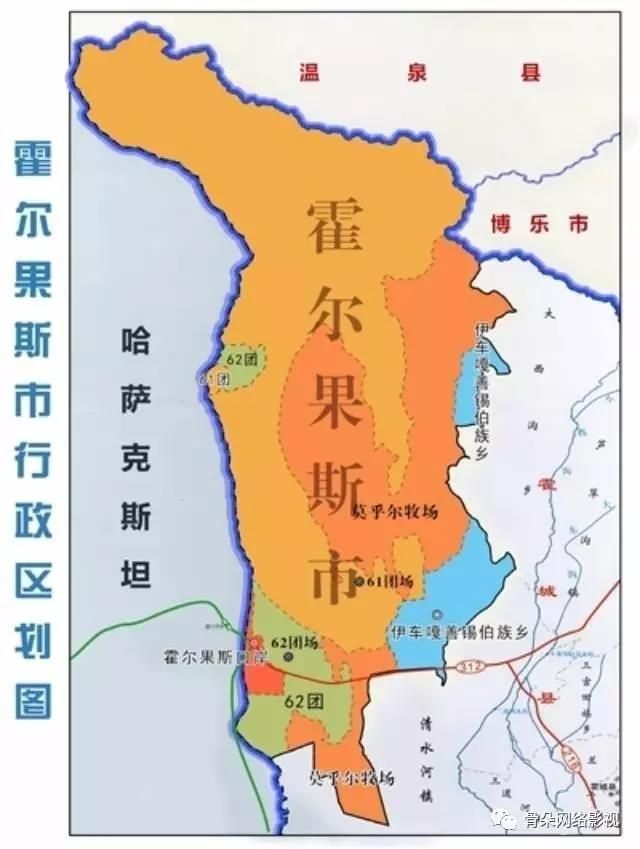 many answers have already arrived: because of the tax policy.

in fact, celebrities have been registered in Huoerguosi, and they are no longer a trade secret.

as early as 2011, “one belt and one road” strategy was put forward, Huoerguosi, Xinjiang was authorized to become a new special economic zone and implemented a tax exemption policy. The most important thing is to provide a “green channel” for registered companies to list quickly. Special preferential policies and service channels have made this side of the city rapidly become a gathering place for entertainment companies.

in addition to film and television companies, a large number of game companies are registered here.

so how much more money does a registered company in Huoerguosi really save? Bones help you figure out this account.

according to public information, Huoerguosi enjoys the following preferential policies:

The newly registered companies are exempt from enterprise income tax within five years (15% of the state tax and 10% of the local tax, totaling 25%). Five years later, 40% of the local retained income tax (60% to 40% of the central and local income tax points) will be returned to the enterprise in the form of “prizes instead of exemptions”. It is equal to the total retention of part of the place, and the time is five years. 2. Value-added tax (central and local tax sharing, the final 50%:50% points) and other surcharges (100% local retained) local retained part of the total (i.e. 50% value-added tax and 100% surcharges) paid in full 1 million yuan a year and began to be rewarded proportionally, with a general reward of 15%-50%. 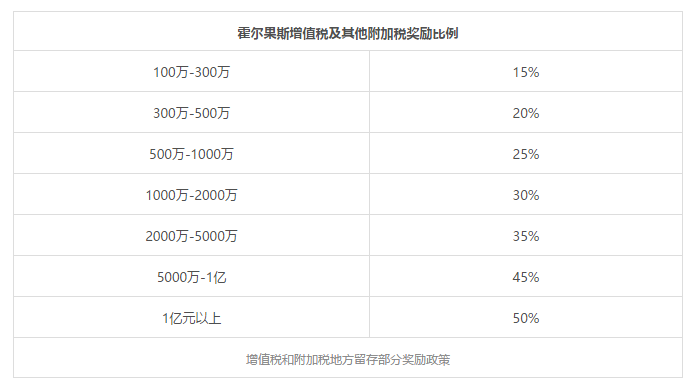 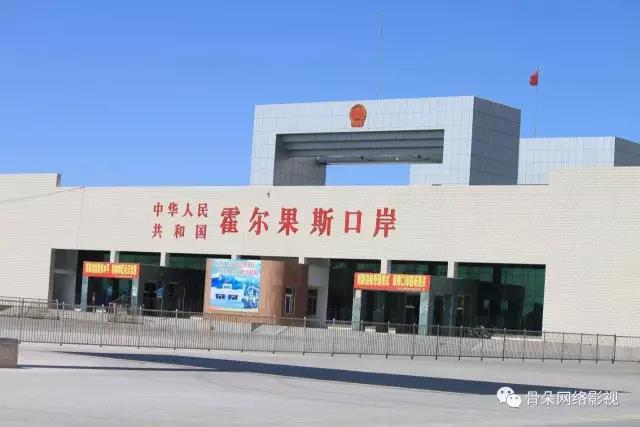 according to this preferential policy, through the calculation of bones, it will be clear at first:

In Horgos, the lowest 15% incentive was calculated, and the final tax concession was $5538679, which was $330,943 less than the original tax. The tax savings of more than three million yuan a year belong to the net profit of the enterprise, which is certainly not a small amount for the enterprise.

It can be seen from this that for high-profit film and television companies, the tax incentives that can be enjoyed by registering in Horgos are hard to refuse.

and before Huoerguosi, there are many places where film and television companies are concentrated.

, for example, 15 new three board enterprises, 5 from Hengdian:

< p > According to the “New Three-board Film and Television Industry Report”, the regional distribution of enterprises in the new three-board film and television industry is concentrated in Zhejiang, Beijing and Shanghai, of which there are six enterprises in Zhejiang Province and five are from Hengdian. Beijing and Shanghai each have 3 listed companies. (only 15 listed companies whose total business income is more than 100 million yuan in 2015)

Six of the 15 companies in the new three-board film and television industry are located in Zhejiang Province. Five of them are registered in the Hengdian film and television industry experimental zone, including Qingyu Media (832698), Pinnacle Film Industry (832927), New Media Chengpin (834522), Zhongguang Film and TV (834641) and Shengtian Media (838445), and the other enterprise Arts Media (833892) is from Hangzhou. .

In addition, Jiaxing Media (830951), which is indirectly owned by actor Yang Power, is registered in Xi’an, and another company from Xi’an is Good-looking Media (835959). Tang Dynasty movies and TV (835885) have produced films and TV works such as “Surprising Step by Step” and “Biography of a Female Doctor and Concubine”. The registered address is located in Tianjin.

It can be seen from < p > that < strong > China’s film and television companies, film industry bases are mainly distributed in the eastern coastal areas, concentrated in the Yangtze River Delta economic zone.

The distribution of film and television companies reflects the distribution of capital in China. Beijing, Shanghai, Jiangsu, Zhejiang and Shanghai are important economic hinterland. Besides capital, the corresponding supporting facilities are relatively perfect. They have unique advantages for the inclusiveness and development of film and television companies.

Taking Feng Xiaogang Film Commune in Haikou as an example, Haikou is a typical tourist city with excellent climate and environment. Its economy is supported by tourism and agriculture, and its economy is not developed. In fact, it is not.

local governments will have preferential policies for these cultural industry projects, .

Take Haikou as an example, if a film and television company is registered with a registered capital of more than 10 million yuan, the Haikou government will give you a subsidy of 5 million yuan.

in addition, the rental office of film and television companies subsidized half of the rent. If you want to settle down and buy a house in Haikou, it will cost 1000 yuan per square metre. The money spent on filming in Haikou does not include actors’money, nor does it include the money spent on the line. Only 20% of the money actually spent on filming in Haikou is returned. The intriguing policies and superpower of are the fundamental reasons why businessmen flock to Haikou.

in addition to Huoerguosi, there are the following places to enjoy the registration privileges.

, located in Dongyang, Zhejiang, was once another “Huoerguosi”. Because Hengdian film and television city is located here, Dongyang is also attracting many star directors to register the treasure of the company. As the largest movie city in China, Dongyang has many policy privileges.

< p > In 2010, Dongyang issued “Some Opinions on Further Accelerating the Development of Hengdian Experimental Zone of Film and Television Industry”. The following points are attractive enough.

< p > Gu Duo asked Ms. Wang, an accountant, to make an account according to the preferential policies, taking an annual revenue of 100 million yuan and a net profit of 30 million yuan as an example:

< p > Searching for “Shanghai Film and Television” from Qixinbao, we can see a large number of Star Studios gathered here. The addresses are all located at 212 Lane 425 Fuyong Road, Songjiang District, Shanghai. 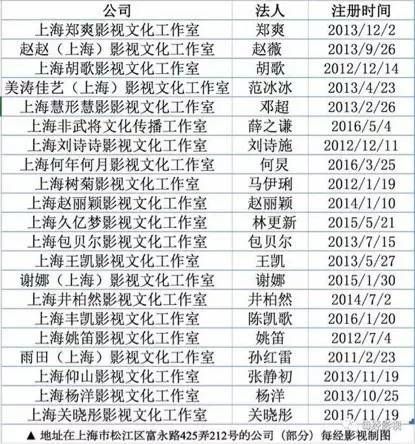 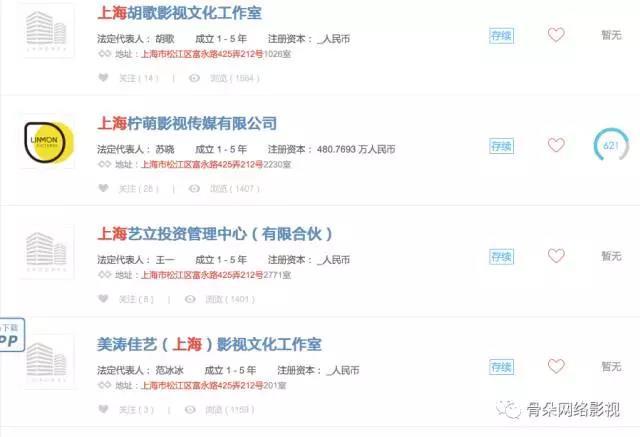 Shanghai is China’s financial center, this is the capital gathering place, star is not unusual in this company. But attracting stars is the policy and environment outside capital. In Shanghai, Biaohong’s “Fuyong Road 425 Lane 212, Songjiang District, Shanghai” is Shanghai Cangcheng Film and Television Cultural Industrial Park, covering an area of 1,500 mu, equivalent to two half-day Anmen.

1, giving enterprises tax protection of 60% of business tax, and

2, giving preferential policies of income tax 20% to enterprises located in the parks,

3, giving preferential treatment to the enterprises in the park.

is also located in Jiangsu, not far away from Shanghai, where many film and television companies are stationed.

No.2009 Lihu Avenue, Wuxi City, Jiangsu Province, is actually the address of Wuxi National Digital Film Industrial Park. Before that, Wuxi Municipal Government issued the latest support policy “Some Opinions on Supporting the Construction and Development of Wuxi National Digital Film Industrial Park (2016-2020)” to establish special funds to support the development of the park. We should increase support. The special funds are used for the entrance incentives, tax contribution incentives and the implementation of the incentives stipulated in this policy to attract well-known domestic and foreign film and television industry chain enterprises to settle in the park. 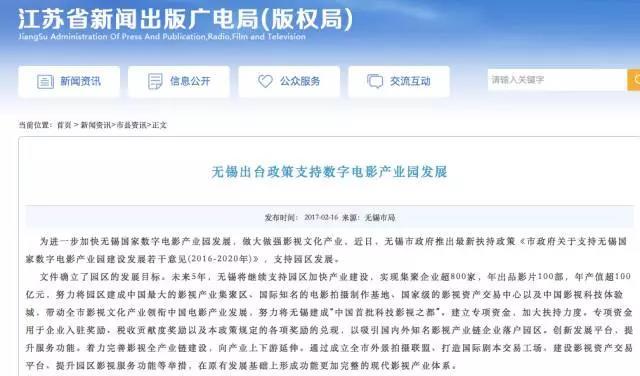 Not long ago, Wuxi National Digital Film Industry Park and German Badstupug Studios formally signed a strategic cooperation agreement in Berlin, Germany. In the future, the two sides will establish long-term strategic cooperative relations through resource sharing, technological exchanges, talent exchange, project cooperation and other means to achieve mutual benefit and win-win situation. It is not difficult to see that Wuxi National Digital Film Industry Park has captured the “first single European” trend of “going out” to be able to integrate with the international market is also a lot of film and television companies look forward to and need resources. Fan Bingbing and Li Chen’s couple shop, Liu Shishi, Wang Baoqiang studio, as well as Zhao Liying’s film and television companies are located here.

The reasons for registration are not only the preferential tax policies, but also the subsidies, support and incubation of the SARFT, cultural departments and cultural industry funds.

in conclusion, it is not surprising that there is a policy boost and the “Huoerguosi phenomenon” appears in the film and television industry.